Sleeping on Me by Beacon Light, Spencer Kane 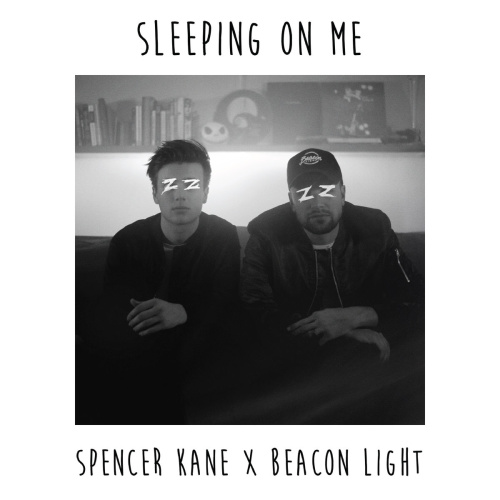 Sleeping On Me - Single by Beacon Light

Sleeping on Me
by Beacon Light, Spencer Kane

Album: Sleeping On Me - Single

Intro: Spencer Kane
(Wake)
We ain't on your radar
Well, put us on the map

Verse 1: Beacon Light
They sleeping on me, and I told them so
They backwards, they got a Yoda flow
But I melt the record like it's provolone
And I serve up when the count is low, it's four below
They'd comatose, but I pour that Folger flow, wake up
Go fight, we are toe to toe
But it looked like totem poles, wake up
Yeah, everybody been asleep
I've been moving on the beat
I've been dropping all the flames
You gon' really feel the heat
You gon' really feel the heat, ay
Look, this ain't a game
I told them I'm 'bout to run in their lane
They've been looking at me like I'm insane
I guess that I am 'cause I'm looking for change, yeah
I'm out of my mind, you know that they signed
Forever changed, when I dotted the line
And I've never been the same since on my rhymes
Like metamorphosis, this is water to wine, yah
I am up on the daily
Sleepwalking, they daydream
Sleep talk, they may say things
For the record you won't play me
Sauce on 'em, I am Beijing
Call it on, so say free
J, hold, no Jay Z
Lay low, let it bang, yeet (yeet, woo)
There's a war, there's a war, sleeping on, woo
I'm in the booth
But when I am shooting I call it the fort, bang (yeah)
Wake 'em the zombies
Tell 'em all that they can know where to find me
Tell 'em all the manufacturers that signed me
I got the cure to their sleep, and they want it, wake up

Verse 2: Spencer Kane & Beacon Light
Y'all had no idea I could ball like this (ball like MJ)
I could see it all, fix your glasses (fix it, woo)
Ooh, I do it on time
Ooh, I, ooh, go
I wanna give them something new I had never done (never done)
People saying just quit, I am never done (never done)
Imma stick to my cards, and I play and run
Three of a kind, and I'm only one (only one now)
Now they see me up, asking me
If Imma put them on something (on something)
That is not how this works, you must think I'm tripping on something
I have never seen a ghost, but I've always been ghosted, ah (Casper, woo, I'm shook)
People only want the bread, and they gonna get toasted, ah (Nature Valley)
How you gonna do it like I do it
I'm the only one to see all of the moves
And I got visions, I ain't never gonna tell 'em
I'm on rumour, Imma do it, ever
Imma say that you could never tell me
I won't do it
Every single wall, I break through it
Imma catch 'em all, you can call me, ask
Had a lot of people that won't call me back
I don't even care, like
I just do this all for One
Screaming till the Kingdom come

Outro: Beacon Light
Wake 'em, wake 'em, shake 'em till they levitating
And they know the greatest souls like elevators heart cataleptic all the wretched
And I will pull the trigger, I ain't even hesitating, yeah
I am man, they gon' get it
Till they see blind man gon' read IMG
I am me, He is God, I am free
We are the church, I'm firing, yay
Rose up, He been only when I shoulder, oh yeah
They were sleeping on Him
And they got it now, we all like, "Hold up, hold up"
He the King, He the King, yeah
All bow to their knee, yeah
They'll soon see the way, yeah
Imma live it till they wake
Wake up