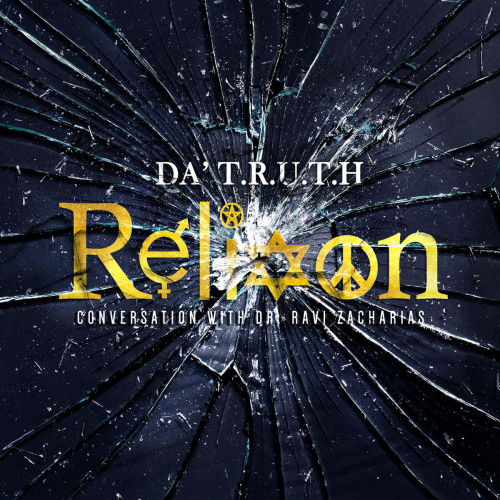 Voice 1
Wouldn't the world be a more peaceful place without religion?

Voice 2
Am I a Christian because I really believe it? Or because that's what I've been taught to believe?

Voice 3
Are all religions equal, can we even know?

Voice 4
What's the difference between religion and spirituality?

Intro, Da TRUTH
Yeah
So many religions in this world
Man, can we really know?

Verse 1, Da TRUTH
I was raised in a Christian home, pacing through different rooms
Son of a preacherman, faith that is been assumed
Brainwashed in my youth, take time to choose
Money or Bible college in train rides to school
Playing follow-the-leader, what am I to believe?
Did I blindly believe when I got a Bible to read?
Then I got down on my knees as the one way to God
Dropped down to plead, a total waste of my time?
Is his name a lie or is his name Allah?
Is it really important, the right name or not?
Can Christ save a life, the ...(?)
I'm not taking chances, my flight plans is cancelled
I call up my pastor, he might have the answer
I might scratch the surface but is the surface enough?
Know the truth is the truth whether we believe it or not
So find me a place to park 'cause I'm circling around the block

Enter Ravi Zacharias
He thinks all these other religions all teach the same things, he obviously doesn't have an understanding of these religions. Pantheism doesn't teach the same thing as theism. Monotheism, monotheistic beliefs are not all the same. What Islam believes about Allah and what the Christian believes about the Triune God are two different things. All religions, at best, are superficially similar, but they are fundamentally different.

Verse 2, Da TRUTH
I understand what the feel when they say that religion kills
Africa, slave trade, the walls that the Christians built
Bible used for oppression, the West on a mission field
Hindu rebels, the churches they striking, the blood spills
When the blow up the mosques Islamic fighters respond
Once they strap on a bomb, intensive fighters arise
All for the glory, Jihad
Japanese empires ruled with the iron rod, but is it the will of God?
They say Abrahamic religions the cause of hate and division
Tell me to which god should I pray and ask for forgiveness
Before I jump off the cliff, make a drastic decision
If I believe in your god will he make a dramatic difference?
Can you answer that question? Am I ...?
Would I still be a saint if I wasn't raised in the West?
How many paths to God? If it's one I'm taking my steps
Hope he's still open to talk to me when I'm facing my death

Enter Ravi Zacharias
Christianity is not the same as who Christ is. In fact, when Peter took out his sword to cut off the ear of the high priest's servant, what did Jesus do? Put it back. Not only did he get him to put the sword back, he got to put the ear back. It is both inaccurate and false what he is concluding.

Verse 3, Da TRUTH
Is it dangerous to be exclusive?
Can we know what the truth is?
"When I'm old enough to decide" huh?
Will I be bold enough to deny
Everything I was taught when I'm making my own conclusions
I pray it's not an illusion
Country with many religions
They all look the same on the surface but
At the core they are fundamentally different
We all on this journey together
And I know that there's a God out there that can make my eternity better