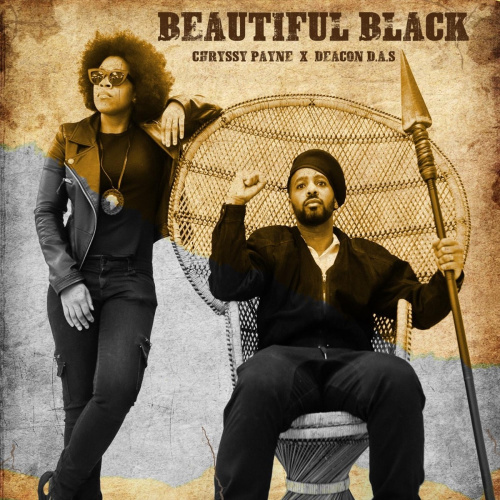 (Verse 1 - Deacon D.A.S.)
Still Black in America, My black experience, the black experiment
from the projects where I project the real like reels
where I lived in mass hysteria.
Tryna press passed the barriers that were there for us.
The hood'll bury ya, is what Momma said to us.
It's a cold cold world put on your hat and gloves
I'm from the ERA of terror. all we had was us.
Cz They act like our black lives don't matter much.
Attack our character. It's hard measure up
if you didn't measure up crack in my area.
For that Pelle Pelle and a pair of chucks.
Now half of my fellas felons from Selling drugs.
Three strikes and you're out, batters up.
From the middle passages, The struggle Bettered us
Listened to Nelson Mandela tell us to spread the love of Christ
don't let it Worry us. We're warriors!

Hook -
I can see the LIGHT in your DARKNESS
eyes open, eyes open

(Verse 2 - Chryssy Payne)
Now I shall not be moved like black folk in the 60's,
Marching, walking, fire starting, yo that south wasn't pretty,
And that cross wasn't pretty when they lit it in flames (whew),
They'd rather see me hanging from a tree like strange fruit,
Don't try to box me like Davis, Wells or Chisholm,
I try to show them Christ, he can erase all of the isms,
yessum', that's what they'd say, before they walk away into the colored entrance all because they look different,
they wanted us as maids cause we cook different,
They wanted us as slaves because we built different,
it's absurd they hollerin intolerance,
seems like we're surrounded by modern day Bull Connors',
but Love covers a multitude of sin,
Dr. King had the right idea when he was going in,
but I'm glad that we made it through,
we made it happen,
I be feelin optimistic when I hear them sounds of blackness

(Verse 3 - Deacon D.A.S.)
I am black history. And black future in the present tense.
Beautiful black blessedness.
From share cropping to share options. the black message is.
Turn that Black misery into Black excellence.
Knowing where we've been. Where we are. And Where we going.
I see it, I'm woke and my eyes are wide open.
Take Just a moment. For the souls of those who Set this all in Motion.
They Carried a heavy yoke and there is debt that we owe 'em,
for running the race for the race like Jesse Owens.
We re standing on the shoulders of giants.
Who stood up to injustice just as bold as the lion.
Over-comers that overcame hate with love and non violence.
Forever remembered like the titans.
No one can deny it. Gotta Keep ya' head higher
like a giraffe. In spite of the past.
Let God's word be a light to our path. until we're FREE AT LAST!