United - The Story Behind the Album by Newsboys 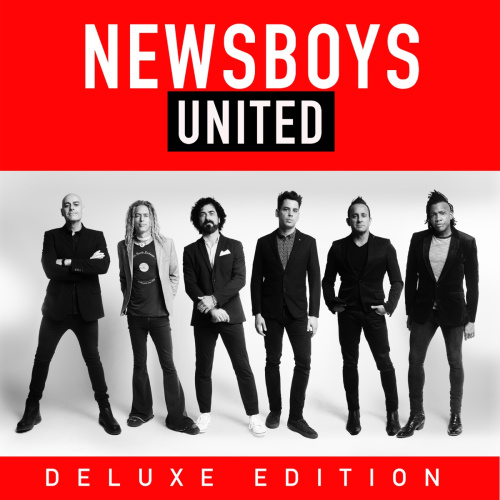 United - The Story Behind the Album
by Newsboys

HANNAH: Well, congratulations on the record.

HANNAH: Excellent stuff, and, uh, I, I really would like to know... Uh, Peter, I'll start with you, since you kinda came back: What led you to wanna rejoin, or reform, with Newsboys United?

FURLER: Well, you know, the boys started working on a song called "The Cross Has The Final Word," and uh, they just kinda called up and said, "Would you like to, you know, be a part of it? Maybe just produce the track and, and see what you do to it?" And so I went into the studio, and uh, I sung down a guide vocal, and they really dug it and they're like "Hey, can we keep you on this track?" You know, and I was like "Yeah," so next minute we're doing kind of a, a guest vocal thing, featuring, you know, myself.

FURLER: You know, when you're working together, you start to have conversations more and, and uh, we started chatting about what would it look like to have the two eras of the band tour at the same time, and uh, I thinkâ€"you know, Michael and I, we've discussed this, weâ€"before it started, we didn't know if it was gonna work, or how it was gonna work. In fact, I think we only booked a certain amount of dates.

HANNAH: Just to try it out, yeah.

FURLER: Yeah, if it didn't work, we could all escape, and uh... Hannah and Tait laughing But uh, but it worked really well, you know, it was great. And we've loved it, and then, you know, moving forward, it's morphed into something completely different. It's really, we've uh, we've obviously done shows together now, we've done about 120 shows, and we're kind of, uh, keeping each other on more on stage, like "Mike, can you sing on this?"

HANNAH: Yep, and the next step now is you're all gonna get an apartment building and just live communally.

FURLER: Well we will, we'll be living back where we started out, that's what weâ€"no, we're actually gonna get a van down by the riverside. All three laughing

HANNAH: Was this all your bright idea, Mike?

HANNAH: "Of course not!"

TAIT: And Peter and I go back way back, back in the days with K Max, are our besties and Tobymac, back one day, we did the Nu Skool Jam.

TAIT: Touring together, we had no clue we'd be together, and it's been an absolute pleasure and joy. I love this man, and I've had a great time on stage.

HANNAH: But everybody's great friends, brothers, and, and it's just, families are tight.

HANNAH: But what were, you must have had some... mixed emotions a little bit? I mean, you left for a reason. Nine years fast-forward, you're back in, did you have to wrestle with any of that, or was it just like "Nope, I'm in, let's do it"?

FURLER: Coming back, I didn't really have to wrestle because we had, it was a slow process of kind ofâ€"

FURLER: Yeah, just kind of working on the song together and kinda hanging like we're hanging now.

TAIT: And the best part about it, to be honestâ€"and the best part, and kinda the weirdest part is thatâ€"let's face it, Peter started this thing years ago when I started DC Talk with Tobymac. I'm more concerned about how it's gonna work, as opposed to how I feel.

HANNAH: What is soâ€"just as an outsiderâ€"what is so impressive to me about it, looking at it from a distance a little bit, is, th-this, this unity that you have, I think you can feel it in the concert for sure,

HANNAH: I think you can feel it in the records, I think it sends a really good message. And I feel, when I look at itâ€"

TAIT: And you can't fake it from stage, peopleâ€"

HANNAH: Of course not.

TAIT: People can feel the difference. They feelâ€"when you're on stage, you're getting along with each other, you're lovin' each otherâ€"you can't fake the funk, baby. They know what's up. They get it.

FURLER: That's trademarked, by the way.

HANNAH: Get the lawyers on that right now.

FURLER: Uh, there's, there is one thing I really appreciate with all of the guys, is there is a gratefulness. We don't...

FURLER: We kinda know who we are, and we don't have...

FURLER: We, we, you know, we, we can have a meal in Nashville at a restaurant and there are probably ten musicians in that restaurant serving the food that are way better than we are, or, you know...

FURLER: So there's a gratefulness of, man, there's so many people, talented people, that are on tour we see, we see people that are rising up and some that are doing different things, but we are grateful.

TAIT: And one thing I've always loved about Newsboys, before I joined and even now in being in the band, is back in the day, Toby and I would look at Newsboys' production. Their shows were always over the top. I'm like, "How can these guys afford this?" And now, I'm in the band, and sometimes we still can't afford it but we do it anyway. Hannah and Furler laughing And, our shows are second to none as far as production too.

TAIT: So I'm gonna have the production side down, Pete, and the musical side down, God on board, what more can you say?

HANNAH: Yep, there you go. I-I know hope, I know the gospel, I know, I know wâ€"those are the themes of the record. But if, is theâ€"is there a preeminent message or theme that people are gonna get when they, when they listen through track-by-track to Newsboys United?

FURLER: Yeah, I think they're gonna be encouraged, you know. And um, and they're gonna feel unity. Right now we're living in a country, and a world, that is very divided, and maybe getting more so. Um, uh, so I think they'll sense a unity, and they'll feel encouraged. I think uh, I think the one thing about Newsboys music that has always been its constant, you know, it's tried different things and different instruments and different arrangements and things but there's always a, a joy to it.

HANNAH: One final personal question for each of you: what is the preeminent thing that God is teaching/showing/revealing to you in this season of your life right now? Personally, now.

FURLER: I think for me, um... Not to weigh yourself out to get rich, have the wisdom to show restraint. The borrower is slave to the lender, you know. I think for me, um, you know, growing up in coming from a middle class, lower-middle class family, and then coming into a lot of success, I got caught up in material things. And so the last decade, lastâ€"it's just been living a simple life. And it's more the practical things that are in the Bible. A lot of times we get hyped up on, uh, "I can do all things through Christ who strengthens me." Well, you can't if you're in debt up to your eyeballs, know what I mean? Hannah laughing So, it's just some practical things. There's a lot of practical things in the Proverbs, and uh, that really speak to me at this time.

HANNAH: Tait, man, what about you?

HANNAH: Yeah, go ahead and try though.

TAIT: Bishop Furler over there. Hannah laughing Um, a lot of people are, are kind of shocked by this when I say it, and thinking, "well you're Michael Tait, you know, you're DC Talk, you're this guy, you're that Christian, blah blah blah." But it turns out that every day I'm human, and my humanness makes me doubt my faith sometimes, makes me doubt that God actually loves me. So in this season, I spend a lot of time in the Word. I spend, I mean, there's, probably not a day goes by where I don't actually read the Word and get into it. The Word I know so well, but I read, study the concordance and, and all the commentary on it. I read about a God that loves me so deeplyâ€"and it's hard to grasp sometimes, 'cause I've ? lovin' myself sometimes. But I know God loves me that much, I can then walk out the house, accept the fact that I don't have this or that or I might lack here or there, but it's not about that. It's about knowing the Savior, vertical. "Love God," first commandment, "and love your neighbor as yourself."

HANNAH: Well said. The cross demonstrates what you're talking about too, so amen to that. Well it's been a privilege for me, over a few decades now, to, to watch you all in your various endeavors and to play you on the radio and cheer you on and talk to you.

HANNAH: Well thank you, thank you very much. I really appreciate that. I, I, I'm thankful too for everybody who has listened to this. If, if you haven't listened to the record yet, go back, hit track 1. Come see Newsboys United in concert, uh, i-it, you willâ€"especially if you don't know, like, you'll walk out of there and you're gonna be like, "Wow, I cannot believe what I just saw." You, uhâ€"s-suffice it to say, you get a lot for your money when you go see the Newsboys. And God just might use the music to change your life, so. Check out newsboys.com for the tour stop closest to you. Thanks for listening. Thanks Michael, thanks Peter.