We Gon' Be Alright by Tye Tribbett 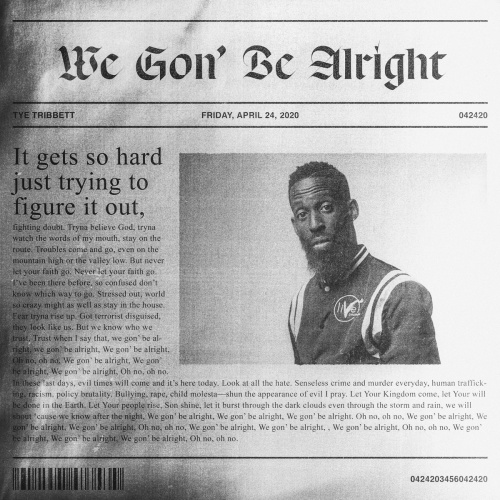 We Gon' Be Alright - Single by Tye Tribbett

We Gon' Be Alright
by Tye Tribbett

Album: We Gon' Be Alright - Single

Verse One
It gets so hard. Just trying to figure it out, fighting doubt. Trying to believe God, trying to watch the words of my mouth, stay on the route.

I've been there before; so confused don't know which way to go. Stressed out world so crazy might as well stay in the house.

Pre-Chorus
Fear trying to rise up; got terrorist disguised, they look like us.
But they know who we trust.
Trust when I say that...

Verse Two
In these last days evil times will come & its here today. Look at all the hate, senseless crime & murder everyday.

Bridge
Let Your Kingdom come
Let Your will be dome in the Earth
Let Your glory rise
Let Your Son rise
Let it burst through the dark clouds
Even through the storm and the rain
We will shout cause we know after the night...