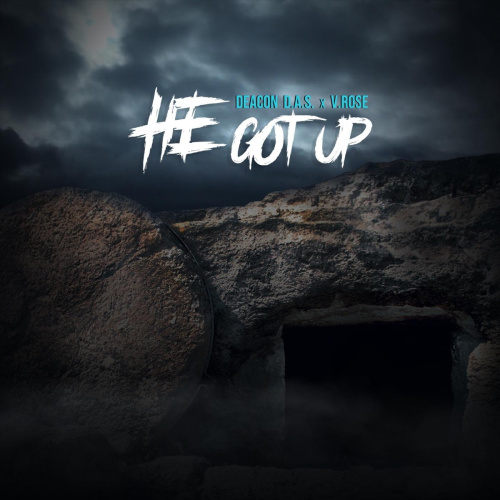 Album: He Got Up - Single

(Verse 1 - Deacon D.A.S.)
Now I know the faith walk ain't a cake walk.
Man The Saints gotta Pray hard.
Yes, we all need grace in grey parts.
Cause we fall short of the glory that's Saint Paul.
Straying off in our thoughts, is the way it starts.
Sin will take you way too far, keep you way too long.
and there's a great cost. Involved. That's straight talk.
I tell you I carried the same cross.
Ive Been there, Had my share of pain and scars
Been lost and I had to change course.
Play it smart. Stay below the Radar.
If I don't take nothing for the journey but I take heart.
Because we can't lose sight like Ray Charles.
Gotta fight like Braveheart, wage war,
and Be a light when the day is dark.
quasar- great star. Speaking life in the Graveyard.
Praise God.

(Verse 2 - Deacon D.A.S.)
He's the LORD of the Resurrection.
And that's MORE than just idle talk
Christ can RESTORE what you might have lost
And Turn YOUR depression into effervescence
Yes n that's impressive.
Rest and Respite FOR the Restless.
for the record I've seen his hesed love
manifest in my own mess. When he Stepped in.
Cz I am wretched. Feeling less than.
Second guessing. Doubt crept in.
Was often Lost with no Direction.
Headed towards a dead end.
And far from his perfection.
Dead in my transgressions and sins.
Then he breathed breathe with his heavenly wind
The blood can cover up all your imperfection
Hope and a future like George Jetson
So we Bless him.

(Verse 3 - Deacon D.A.S.)
I know you maybe the sunken place,
just trying not to suffocate.
And wishing that you could run away, Somewhere safe
To escape, the pain that you don't want to face.
The shame when you're so afraid.
Those chains that you just want to break.
Of the Hurt that you carry from a younger age.
Or the mistakes you made just the other day.
I truly sympathize when you've suffered great.
Christ can Empathize. Christ can relate.
Gotta emphasize can't minimize,
he bore our sin when he died.
But got up from the grave.
yeah
And if the Son was raised.
And we trust in the One who saves.
then we're Covered by his grace.
and His love would never Fluctuate.
He won't shut the gate.