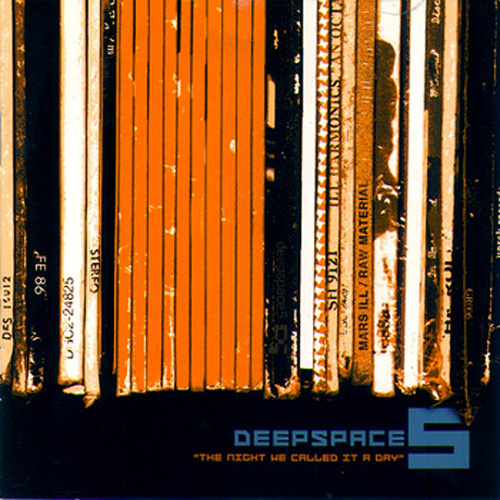 The Night We Called It a Day by Deepspace 5

Album: The Night We Called It a Day

(sev statik)
i sung a song of freedom way before the sixties
shackled in my chains quickly, search for freedom
stick these music notes to the sky for my peoples to see em
so they might just lead em from the night to freedom
be it said, i made a man from a fool
damnation is upon this earth, search for freedom
who else is seeing what i'm seeing ain't believing
while we're bleeding for the cause of freedom
god's laws, i keep em close as much as any human being could
you and who? crews left behind should
now get in line for the food for thought we're serving
for the freedom i hold is worth it all gained
change is pain, death stays the same, no growth
no hope, all lies, no sunrays, just rain
titles are taken as the day gets longer
stronger i become in forgiveness for freedom.

(manchild)
focus on the blurred words, hopeless in the first verse
insert bursts of energy and focus on the worst curse
it hurts worse, focus until these scribbles become a picture
wallpaper my padded cell with explicit content stickers
and i figure i noticed my focus slipping out the back door
things i wrote made no sense to me like a retail crack store
decided to speak less and focus on the track more
found my focus , patched the wounds, became each other's solace
felt your feelings with my fingertips, fell back from the painfulness
found my way to my feet again and pleaded with my label this
is twenty-something years in the making, raw forms of innovation
forget the commerce. let's focus on creation
focus , shoot holes in your perception, you'll hit the target
make sure you take your shoes off when you're walking on the carpet
from the harlot to the virgin, any soul in time and space where i trod
i shake the gates of hell and focus on god.

(listener)
the fact is; most of the time i rhyme
i force fiction into your minds, i feel guilty for awhile
because of your susceptible nature
but then i smile consciously at it's design, for a fact
i do this art like it's my only way to speak
paint 35-second murals into your thoughts with the fumes making you weak
the fact of the matter is my heart tears four ways for your bleakness
fortunately i know that you're just being fecicious
but that's not a fact that most can heavily rely on
my quest is to factually find the balance between classic and krylon
forgetting the bold-faced facts is what you seem free to focus on
deepspace5 freaking fictitious crews with our fact fractions
fostering truth, raising up your broke minds in traction
our faction flattens all lies you want to give us
searching out facts to uncover your injustice.

Bridge:
"a," absolutely, "b," because it's dope
"c," constantly moving heads and going for broke
"d," the definition of def, "e," excel to burn emcees
"f," finishing words eternally.