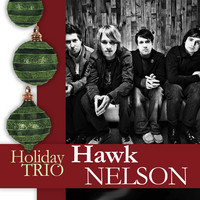 Ron and Nancy got the house but Sid and Nancy rule
I died 8 years ago I'm still a legend at my high school
I stole a Chevy and I wrapped it round a tree
But that's OK cause no one's gonna make the next century
I'm up in heaven now they say I'm here to stay
Where the clouds are really puffy and the angels sing every day
Alleluia Alleluia Alleluia, Wo-oh . . .

The cafeteria's got everything it's gonna drive me mad
Cause it looks just like a big Hawaiian party that my mother had
It's like the worst Elvis film I've ever seen
Technicolor luau all on technicolor green
There's camping trips and donkey rides and singing round the fire
And they signed me up for surfing
But they can't get me in the choir
Alleluia Alleluia Alleluia, Wo-oh . . .

But there she was this morning getting fitted for her wings
Leather boots magenta hair and saying nasty things
I'd say she was an angel but it's stupid and it's obvious
I said you'll hate it here cause we're the only ones like us
It's crypto-fascist mania it's silicon deliria
Yeah, she said, you're right, but I like the cafeteria