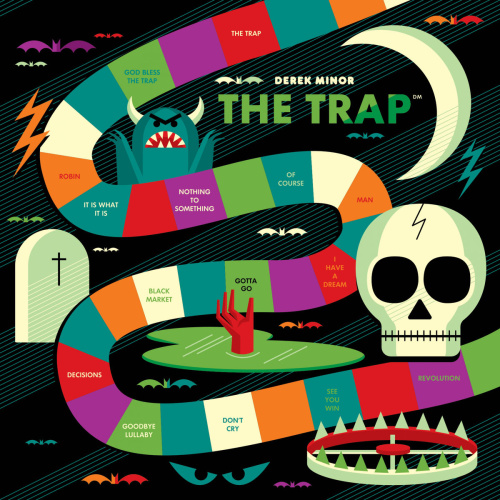 The Trap by Derek Minor

Verse 1
Who gave the real Rick Ross coke?
To spread it 'from coast to coast
I know, but if I said it ya'll would kill me
Just google Gary Webb if you feel me
Ain't gone spell it out all the time use your mind
How they brand kids as slaves
Get dope 'cross ocean tides
Or borderlines or county lines
I'm stuck
Now black men are mascots for hell on earth
Tookie started the Crips and told us own your turf
So now we shoot in the gym or the block for survival
But either way we blue devils
My cousins went to jail for sellin' weed
Now in Colorado you get green leaf with green tea
At first pumpkin spice latte's were her addiction
Now she throw them yoga pants and Ugg's on to smoke in Denver

Verse 2
Yeah, Yeah
Somebody asked why I ain't got a deal
Okay, I'm 'bout to keep it too real
I'm too black for some people taste
They can't serve that to their base
And others think I'm way too safe
Cuz I don't brag about what I got in my safe
Or xanny'd out my mind, in a life of crime
And I ain't never live but it works on Spotify
You ain't selling a character
Me, I won't be Carlton Banks to make you feel peace
Or generic street
You can exploit
If you ain't get the iMessage yeah this the text boy
I'm the reason Christ died and Martin was marching
Speak the real truth to the ones in the margins
So they can dodge the lie from the snake in the garden
And I tell it in the church and NY at the Garden
Black market