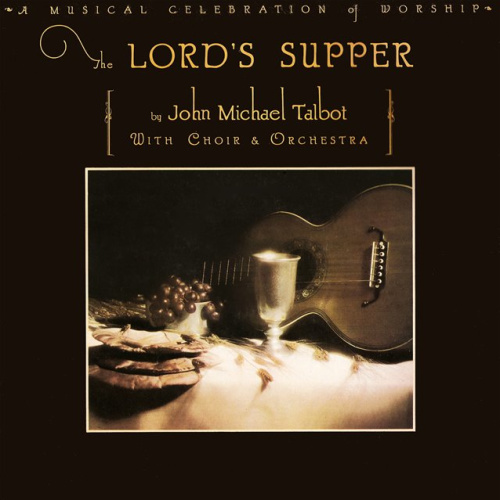 I would like to explain the nature of the unusual music that comprises 'The Lord's Supper' and its importance to those who participated in its creation.
This is an album of liturgical music. The dictionary defines "liturgy" as a "common work" or "common action." The liturgy of the Church, then, is simply what is done when the Body of Christ comes together - there is prayer, singing, sharing of God's Word, and offering of thanksgiving, and experiencing the fullness of the Kingdom of God through the Bread and the Wine. As this recording was made, the spirit in the studio was a true reflection of a "common work." The "common work" of those from the Body of Christ in Indianapolis - the singers, arrangers, producer, and engineers - was worship of God and the returning to Him of the gifts He'd so freely given each of us. It was, in fact, the selfless giving of everyone involved that makes 'The Lord's Supper' such a joyous experience. The choir of saints behind John Talbot was not a large group of paid professionals.....it was the small band of folks whose pictures grace this sleeve. Few, if any, had ever seen the inside of a recording studio and, quite possibly, might never again. Their enthusiasm - which never waned even during the long hours needed to overdub their voices - was not so much for performing but for explaining and demonstrating that there IS life in liturgy when it is Spirit-led.
You might find it surprising that the lyric content of 'The Lord's Supper' comes almost verbatim from formal liturgies that date back several centures. Equally surprising is how contemporary those lyrics sound when set against modern orchestration. It simply offers further proof of the timeless nature of worship when the participant is allowed, as in this case, the freedom to sing under the inspiration of the Holy Spirit. The power and awe that is manifested by these ancient liturgies has deeply moved even the non-believers that have heard the songs in a semi-completed state.....and for that we can only thank the Lord for an opportunity to witness to His glory in such an unusual way.
Ultimately, 'The Lord's Supper' is not a "listener's" album - it requires participation! Liturgy is for all on behalf of all; and I exhort each in the Body of Christ to become involved in the praises, in the joy, in the total celebration of our loving Father, our Redeemer Jesus Christ, and the precious Holy Spirit!
- George E. Wilson