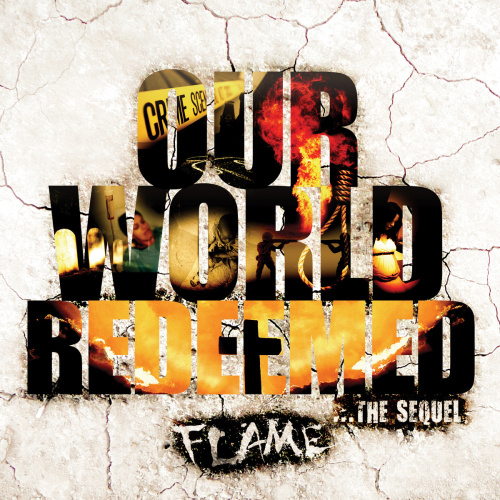 Our World Redeemed by Flame

Spoken:
Matthew 24 verse 30. "And then, the sign of the
Son of Man will appear in the sky and then all the tribes of
The earth will mourn. Why? For they will see the Son of
Man coming on the clouds of the sky, with power and great
Glory." Every eye will see Him that is the scope of His
Coming. Every eye will see him, it is visible. Well I got news
For you, when He comes in, you're going to know He's
There; you're going to know He's around

Verse:
Picture Christ coming back like a thief in the night
Came
Riding a white horse with the force of a night
Train
Heaven's open behold and overthrowing your dice
Game
With His pure and Holy vision eyes blazing just like
Flames
And nothing can escape the penetration of His holy
Gaze
His eyes in all places recognizing unholy ways on
His
Head are many diadems or victory crowns
Who's the
Victor fit to be crowned in human history now
With a name
Written all over Him that nobody knows
Clothed in a robe
Soaked in the Blood of His foes
Symbolizing the battle won
With Satan sin and the grave
Death has no more
Strength
Heaven's armies arrayed in fine linen
White and
Pure following Him on them white horses
The word of God
From his mouth is a sharp sword
Who can thwart Lord your
Divine report card
That reports the hearts of the nations
Have failed hard

Spoken:
When Jesus came the first time, He was falsely
Accused, He was reviled, He was rejected, He was tortured,
He was treated like a criminal - He was hung up on a cross
And killed. He's coming back to clear His name. Look over
At Matthew 26... and the high priest said to Him; "I adjure
You by the living God that you tell us whether you are the
Christ the son of God."

Verse:
In the scriptures we find facts
Pictures of divine
Acts
Prophesied God provides wisdom the mind lacks
At
History's climax
More vivid than IMAX
The sky cracks with
Jesus on some, I'm back
Now, just try to visualize the most
Glorious site ever to hit physical eyes
Holy angels in Christ
Who gets minimalized in splendor arrives and all the dead in
Him will arise
Believers who are alive become a maturated
Order
And caught up in the clouds like evaporated water
To
Be captivated by the Master's grace and aura
Before He
Activates the slaughter on the cats who hate the Torah
The
File wildin' out and doubt and wouldn't call on Him
And now
Crying out for the mountains to fall on 'em
The dead come
Out the grave at the holy judge they look
They're broken up
And shook while He opens up the books
All sins will be
Weighed not ignored
And law breakers slayed (slain) by the
Sword by the day of the Lord
While we gaze and admire His
Greatness, liars and fakes who hate Messiah they expire in
The fiery lake
Made for Satan and his angels sent to
Deceive
Multitudes who refuse to repent and believe
The
Elect have no hell to fear
Cause we're related to the judge
Like the Fresh Prince of Bel-Air

Spoken:
Listen, there is coming a time in God's providence
And God's plan when He is going to once and for all finally
Do away with Satan and with the angels that followed
Satan in His rebellion those non-elect angels. Those
Demons God will deal with them all at some point.

Verse:
In the scriptures we find facts
Christians in God's
Wrath
Two different paths that never cross the cross
Bought the divine pass
The wicked had a mind
Lapse
Resisting to the time that the cataclysmic,
Catastrophic judgment turned the skies black
No date
Setting clock watching or time seeking
Only the Father can
Bother with the divine secret
Not even Jesus is time
Peaking, but I'm speaking of His humanity - every man and
Then every woman
Who lives in vanity will be saying at the
Second coming
Set the hands of time back, please God
Rewind that
The Bible says that I'm a sinner
Then I confess
That I'm that
But God is beyond that
Weep and plead but
His fury will be like the turbulent seas
The elect will be
Gathered from all the four corners
Of the world boys and
Girls who thoroughly tried trying to warn you
Of the cosmic
Disruption of the physical order
And the stars start fallen
Fire drying up the waters
But the cross was sufficient His
Death was efficient
To take a wicked bigot and flip it make
Him a Christian
Teach him the Great Commission
His
Mission is soul fishing
Before He's revealed from Heaven
With mighty angels
And flaming fire asked the Messiah to
Change you
Eternal Hell fire ain't worth sinning
It's time to
Search your heart like the google search engine

Hook:
... When the Lord Jesus shall be revealed from
Heaven with His mighty angels in flaming fire; dealing our
Retributions to those who do not know God and to those
Who do not obey the Gospel of our Lord Jesus. Salvation is
Obeying the Gospel, refusing to obey the Gospel results in
Judgment. Obey the Gospel and these will pay the penalty
Of eternal destruction, away from the presence of the Lord
And from the glory of His power. When He comes to be
Glorified in His saints on that day and to be marveled at
Among all those who have believed - for our testimony to
You was believe. So He's going to come - He is going to
Judge the ungodly. And the Bible says, those of us who are
Saved; we are going to marvel; this is going to be an
Amazing thing
He could be coming back tonight...