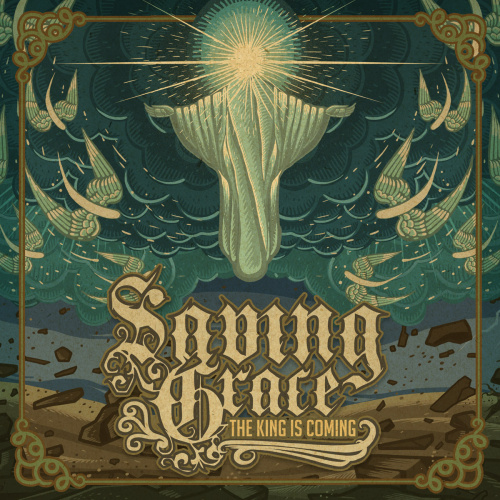 The King Is Coming by Saving Grace

Album: The King Is Coming

A voice like thunder spake "Come!" and one by dreadful one, the four riders arise each bearing his own disaster
Stephanos! The crown and the bow bent on bloody conquest taking the triumphs allowed by the Hand of He in power
The taker and his sword, tranquility slaughtered. The corpses pile high neath his unbloodied blade
Folding history upon the present, unleashing our lust for battle upon ourselves. The hand and the scales renders the people incapable of filling their needs
Drowning in your oil and wine...
And at the beckoning of the fourth creature, with Pestilence upon his back, the pale horse came forth and Hades followed in his wake
They were given power over a fourth of the earth to kill by sword famine and plague, and by the beasts of the earth
Here is the aftermath... each one begets the next. This is no trivial judgement. This the beginning of the end and thus the Great Tribulation begins