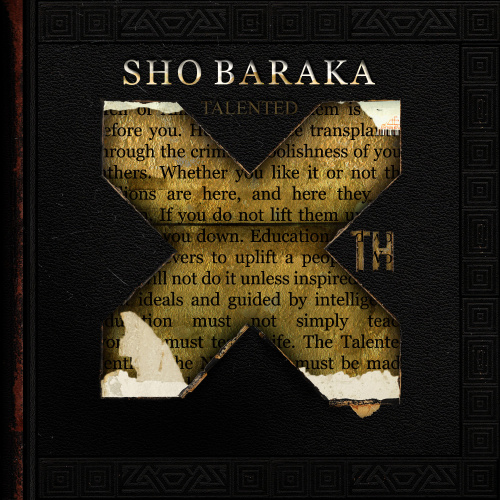 Sho Baraka
Yeah, I feel the pain of a 70's soul single who just saw the death of one of it's soul leaders/
I wanna sell records but yet I feel eager to write political tunes that give a certain ﬁnger/
To talk to God they told me to climb a mountain/
I'm thirsty for His revelation where's the colored fountain?/
As grace rains on the concrete garden I guess it's common sense now that that's water for chocolate/
Mommas tried to keep their babies off the street police got rap sheets so ya kids gettin beat, beat/
Hit after hit video in the crowd and still not enough evidence/
I'm on my Harriet Tubman maybe my sojourner/
More like Martin Luther the King than Nat Turner/
I roll with a team of newly redeemed sinners that know we have to lose our life to be winners/ (live)


Sho Baraka
Born in Alberta, died in Atlanta/
Had 2 parents plus raised by gramma/
Told I was different cuz I spoke with a grammer that was proper/
Cuz my momma tried to raise me with manners/
I'm a lover, I'm a husband, I'm an artist, I'm a father/
I'm a ﬁghter, a believer, I'm an actor, I'm an author/

I ran up son of Adam I'm just lookin for the pardon/
A vegan avoidin the beef that started in the garden/
I'm on my Oscar Grant and invisible children, Jena Six, Rakeem Boyd, I am Bobby Tillman/
I'm on my thief on the cross the prodigal son I was the sheep that was lost/
I'm on my mover and shakers a student of the panthers also learned in the quakers/
I'm on my Zora Neale, Absalom Jones, Harlem renaissance with a Paul Robeson poem/
I'm on my George Washington Carver a humble servant who gave all glory to the Father
I'm on my Rembrandt with a ﬁtted cap, C.S. Lewis if he would ever rap
I'm on my Lord touch down, I love life but you can come back now
I'm on my son of a king, a fresh prince, diverse being, the talented 10th