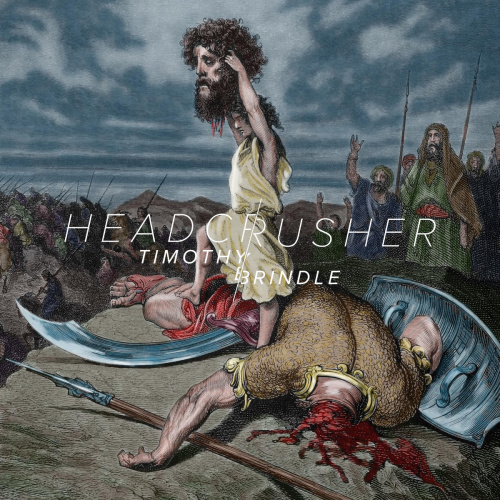 Verse 1:
David and Goliath; A familiar Bible story
but most Sunday school lessons still apply it poorly.
What's the way that most preachers and teachers apply this?
"David's our example! When he defeated Goliath.
And by faith in God, we can beat all our giants
like our fears and anxieties that's inside us."
But that would be "Amen-ed" in a synagogue,
so in this song I'mma show you it's about the Son of God!

Verse 2:
It's better than a moralistic application.
Turn to 1 Samuel, the 16th chapter's blatant.
"Mashach", the Hebrew verb: "Annoint"'s attached to David.
He's the shepherd-king fightin' on behalf 'his nation.
So where can you and I find ourselves in the story?
Surely we're the fearful Israelites on the sidelines.
By Goliath, we'll be stomped to the dust
in God, we have trust
Sin, death and Satan's stronger than us

Verse 3:
But Yahweh's chosen one from the town of Bethlehem.
The Spirit rests on him. He's empowered now to represent.
The shepherd of the sheep represents his peeps,
so his victory's their victory if by death he does defeat.
David's whole life's a pattern in a pedigree.
From his greatest son, the last Adam, his descendent, the
Holy Spirit came upon Him after He descended, He
departed to the wilderness to battle with the enemy!

Chorus:
Is David & Goliath about facing your giants,
or about the Son of David Who was slaying the tyrant?
Over Satan, He triumphed when He suffered and bled.
Our representative King was crushin' his head!

Is David & Goliath about facing your giants,
or about the Son of David Who was slaying the tyrant?
Over Satan He triumphed. He got up from the dead.
The main point of the story: He was crushin' in his head!

Verse 4:
Now let's put our eyes on Goliath,
whom 1 Samuel 17:5 is describing.
And yo: this giant's worser than a cannibal,
Cuz Goliath is described as a serpent and an animal.
In the Hebrew text, let us note detail.
Cuz though they're great, here our English Bibles only fail
by translating his armor as "a coat of mail".
But the Hebrew clearly says that he's "clothed in scales"!

Verse 5:
You'll appreciate this:
That the word "qasqasim" is only found a few other places.
It's used to describe fish, so this should stretch your mind:
It's used of Pharaoh, the dragon. Ezekiel 29.
And "drakon"'s used 12 times in Revelation
in the text for Satan. Now listen to the rest of David:
Verse 36, he's comparing this giant;
He'll be just as a struck down bear or a lion!

Verse 6:
So, is this bizarre? Goliath asks: "Am I a dog?"
Well, the answer is: "Yes you are!"
Cuz the Gentiles are so sinfully flawed,
they more resemble a dog than the image of God.
Before the Adam-king in the image of Jehovah,
the beasts are those He's given to have dominion over.
Yet Goliath takes after his fake god,
cuz he's about to be beheaded like he statue of Dagon!

Verse 7:
He wasn't circumcised, think of them as one of Satan's children
Verse forty-nine. Focus on the way that David killed him.
By the humble slingshot, the stone's crushed in his head
On behalf of Israel, David won them instead.
"Wait. Let me comment. What's with all this head-crushin'?"
Umm, the crushing of the Serpent shoulda already said somethin'.
Genesis 3:15. This verse is read:
"THE OFFSPRING OF THE WOMAN WILL CRUSH THE SERPENT'S HEAD"

Verse 8:
The Gospel was foretold then.
Behold: In David & Goliath, His promise is unfoldin'.
A vivid illustration of how Jesus began
to kill this filthy Satan at the wilderness temptation.
If with my words you wrestle, this verse will settle:
"THE SON OF GOD APPEARED TO DESTROY THE WORKS OF THE DEVIL."

Verse 9:
Like sin's enslavement and attacks of accusation
and power over death; These are the acts of Satan.
So on our behalf, Christ took the wrath to save men
and crush his head, it's comin' back; It's the decapitation.
From the dead, He rose for the sheep. He's the Psalm 8,
Daniel 7: Son of Man, ruling over the beasts.

Verse 10:
A lethal death puncture. The Head Crusher goes for
the giant's weapon to behead him with his own sword.
Like how the cross was Satan's trick,
but his own deeds literally came back on his head just like Haman's did.

Verse 11:
We were trapped in cells, but the giant crashed and fell.
Christ alludes to our story in Matthew chapter 12.
Since the strong man's bound; Christ already conquered him,
now in Kingdom missions, us Christians can be confident.

Verse 12:
Cuz when David disarmed him and he killed him,
he was followed by the rest of the army of the kingdom.
Romans 16's wonderfully deep. Christians!
"THE GOD OF PEACE WILL SOON CRUSH SATAN UNDER YOUR FEET!"